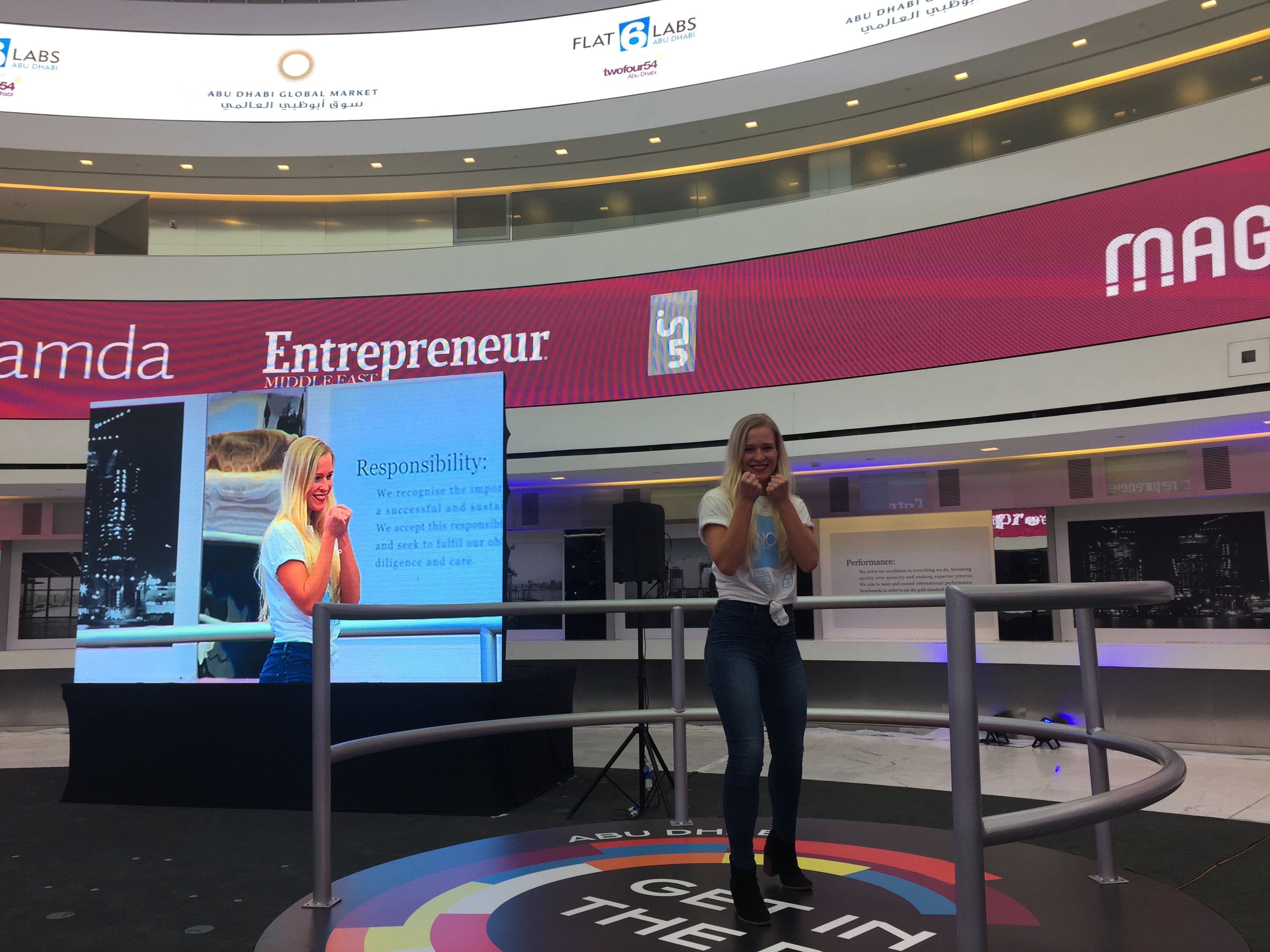 NOW Money has won Get In The Ring Abu Dhabi, an annual start-up pitching competition, which aims to provide resources and exposure to start-ups by setting them in a ring to compete against one another in a pitching “battle”.

The competition, which was organised and hosted at Abu Dhabi Global Market by Flat6Labs, on 28th February 2017, selected 20 start-ups to present a three-minute pitch to a panel of four judges, to proceed to the next round. Eight companies were then selected to have a pitch battle against one other opponent in the boxing ring. There were four rounds of one-on-one battles in three categories, lightweight (company valuation $0-500k), middleweight ($500k-2.5m) and heavyweight ($2.5m+), and across two streams, mainstream and fintech.

Anastazja Kociolkowska, Head of Product at NOW Money, led the pitch in the heavyweight category against fellow Astrolabs start-up, Democrance. Both competitors had one minute to pitch their company, followed by five rounds of 30 seconds to prove why their start-up should win the battle, based on team, achievements, business model, financials and a “freestyle” round.

NOW was selected as the winner of the heavyweight category due to Anastazja’s ability to articulate and demonstrate how NOW is a commercially viable company and aims to make a positive impact in the world.

NOW will be among the three winners (along with fellow start-ups Dinodrops and Point Checkout, lightweight and middleweight winners) to represent the UAE in the upcoming Get In The Ring Global Final in Singapore in May 2017, where all the country winners will compete to be crowned the overall champion.

“Having taken part in many start-up pitching competitions before, Get In The Ring was like no other,” said Ms Kociolkowska. “We were so thrilled to hear we’d made it to the second round to pitch in the ring. Thirty seconds for each round wasn’t long to get across all the benefits of NOW Money, and I wanted to really emphasise that our main aim is to bring financial inclusion, and to provide a holistic financial service to those who have been previously overlooked.”

Omar Kandil, Organizer and Host of Get In The Ring Abu Dhabi, and Program Manager of Flat6Labs Abu Dhabi said “We’re very proud as Flat6Labs to be hosting Get In The Ring with Abu Dhabi Global Markets for the first time in the capital of the UAE. The start-ups were very impressive and my sincere congratulations to all who participated! We wish the three winners all the best in Singapore! Go NOW Money, Point Checkout and DinoDrops!”

“Having a social component attached to a fintech start-up is something we’re seeing more and more, especially in a region where most of the population is unbanked. Good luck to NOW Money!”

NOW also won a booth to showcase their start-up at the Step 2017 Start-up Basecamp and will receive access to mentorship from Flat6Labs Abu Dhabi, the leading accelerator in the MENA region.

NOW uses mobile banking technology to provide accounts, financial inclusion and a range of low-cost remittance options to low-income migrant workers in the Gulf Cooperation Council (GCC) countries, improving their lives and saving them and their families significant money, in a profitable and sustainable manner.

The partners who made this event possible were Wamda, Magnitt, in5, Entrepreneur Middle East.